In Conversation With The Light of the Moon Director/Writer Jessica M. Thompson

For the film The Light of the Moon, Director/Writer Jessica M. Thompson has crafted an intimate look into sexual assault. Bonnie (Stephanie Beatriz) is an assertive and confident Latin woman, who has a great career, a stable relationship with her boyfriend Matt (Michael Stahl-David), and strong friendships. In one night, her ground is ripped from underneath her when she’s sexually assaulted while walking home from a club in Brooklyn.

This particular depiction of a survivor is one we rarely see portrayed in the media. Unlike other films, this complex portrait doesn’t focus its lens on the rape itself or empowers the victim with a disingenuous revenge story, but instead, brings an awareness of what a victim goes through after she experiences rape, and how it affects her inner perception of herself and the relationships she forged with the people she knows best.

This narrative is thoughtfully crafted by Thompson in the way she beautifully constructed the emotional turmoil someone goes through after an assault and the hardships and lack of answers given by various systems in power.

With cases like Brock Turner, and now the light shining down on the film industry, it seems like in the last few years the media is ready to provide an outlet for this difficult conversation. When you first started developing this project, was that the case?

This is what’s crazy — with every turn of events, I thought, “There’s no better time than right now.” The Brock Turner case came out on day one of production. The cast and crew all sat around and read the victim’s statement and it really affirmed that we were doing this for the right reasons and that this story really needed to be out there.

It was Brock Turner, then Donald Trump, and now Harvey Weinstein. It just keeps on getting more and more relevant. Now, I do finally feel that the lid has been taken off and the media is really ready to talk about this issue in a truthful and honest way.

There are movies out there that focus on a revenge story after a victim is assaulted. That never feels like a genuine narrative. Your film is incredibly different in the way it approaches trauma. How was your process writing this story in terms of the content? I know this is loosely based on your friend’s own story of sexual assault.

I had this idea boiling in the back of my mind. I was also getting really frustrated with the way sexual assault was being portrayed in films and television, including some of my favorite TV shows like Game of Thrones. The way they portray rape on that show is horrifying. For one, it’s gratuitous and it’s way too much and sometimes I feel like they’re filming it for the..

Yes! It’s like they’re almost filming it for the male audience to sexualize it and to revictimize these victims. It’s not following the women’s narrative at all. So, I would think about these films and shows written and directed by men and that was in the back of my mind. Then when this happened to my friend I felt compelled to write a story that is written and directed by a woman and that also has cinematography by a woman so that there’s literally no male gaze. 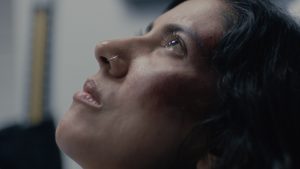 In the very beginning of the film, Bonnie is asked, “What did he take away from you?” And then we see in the film just what her attacker takes away in how she’s affected. How was it fleshing that out?

So many women I spoke to said the first thing the authorities say to them, sticks with them. Out of all the survivors, I spoke with only one had a positive authority figure. I don’t want to bash the NYPD but it’s alarming to me. Usually, they say the completely wrong thing and that can revictimize someone. It’s exactly what you said, and you picked up on it very well the, “What did he take?” She’s trying so hard to let her attacker take nothing. She’s trying so hard to deny it but we all know that’s not how trauma works. We see that he’s taken her confidence, her relationships, the safety of her house and community. It goes through and through every aspect of her life. I improv’d a lot of the writing so that’s how I would get to those places. I improv around a theme, a topic, or a line, and I’d eventually get to that point.

I’ve never seen a film showcase how sexual assault affects relationships. Did you always want to include that aspect?

That was always the main impotence. Seeing my friend and her boyfriend and how they tried to renavigate that. Your partner has to navigate this with you, and I couldn’t stop thinking about how those conversations looked. It’s the ripple effect of how this affects the victims and the people around them, their friends, families, partners and work relationships. It doesn’t just affect one person.

The scene where Bonnie gets assaulted is, from a technical aspect, done really well. You were able to show the intimacy and the invasion of that moment. It’s really brutal in a way that’s necessary. Were you worried about triggering victims?

I was. I went back and forth for a long time about whether I should show it or not. The way the cinematographer [Autumn Eakin] and I spoke about it was that it was always going to be focused on just her face. That it would always zoom in as if we were in her mind. We worked very hard on the sound design to get that effect of her pulling in and out of her mind. From my research, a lot of survivors go through this survival instinct where they kind of pull themselves out of their body. I really wanted to capture that. It wasn’t focused on sexualizing [the rape] in any way.

Still, I really went back and forth about showing it because of what you said. We did a lot of test screenings and I felt that people were not being as empathetic. I did want to reach a male audience and I think people wanted to see it in order to empathize with how she reacts to it. She’s in denial and lashes out at her boyfriend. It seemed like people weren’t on her journey as much when they didn’t see that scene.

I like how at one point it’s suggested that she could’ve been stalked at the nightclub and then later on attacked. With The Alliance’s program Nightlife, they actually go into clubs and nightlife spaces to train bouncers and bartenders so they’re attuned to this behavior.

Yes, I went to one of your events, the September Soiree, and that was the first time I heard about that. I think it’s an incredible initiative. The one time my drink got spiked was by the bartender. I remember blaming myself and saying, “But I held my drink? How did this happen?” But I think it’s incredible to get bartenders and bouncers to be aware of it.

With the uptick in the media’s involvement in the conversation about sexual assault and rape, and the social responsibility we have from campaigns like MeToo, what do you hope for the future?

Through powerful figures in the media like Harvey Weinstein, they use their power to force silence around the issue. I wanted the film to create dialogue. I feel like we can make a change from the power of film. Art has a big role to play in that. I should say that The Weinstein Company was interested in buying us for distribution but we knew the rumors and we knew that we were never going to go with them.

Right now I feel a lot of hope that we are empowering people. I’ve seen 50 women come forward and feel that solidarity in numbers saying, “Even if you judge us, we’re all in this together.” The lid is off and now is our time to stand forward and put a stop to this. I feel like we really turned a corner and I’m excited to see what society does with it.

The Light of the Moon opens November 1st.

Sharing our experiences can have transformative powers. If you are survivor, service provider and/or loved one of someone who has experienced sexual violence, we want to hear from you. Submit your story on our community blog.
Required fields*
We ask for your email so that we may reach out to help you or your loved one. It will not be made public or shared with anyone.
Thanks for signing up!
TRAINING REQUEST
Required fields*
Please provide us with detailed information (date, time, location, and type of training)
Translate