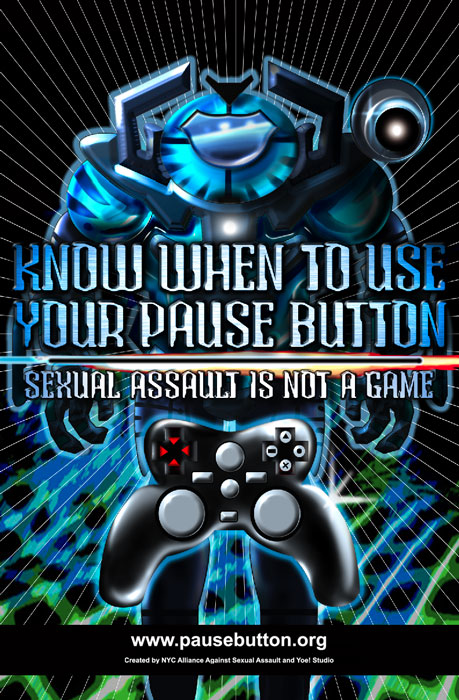 The Alliance conducted a comprehensive literature review, extensive research on existing campaigns, and direct research with target-aged boys and girls. After a long, careful development process working with experts in research and design, the Pause Button Campaign was the best poster we’ve seen for this audience.

The message was simple and effective: “Know when to use your pause button: sexual assault is not a game.” Focus testing found that boys felt clearly that this message was intended for them, and that if they came across an ad like this, no matter the location, they would stop and check it out. All boys immediately and readily understood the message: as a 9th grade boy participating in a focus group said: “It’s not a game. You get points in playing games, but you don’t get points for rape.”

The campaign was part of the Alliance’s ongoing effort to reach out to youth and provide information and access. Various service and advocacy organizations throughout New York will distribute the posters in an organized campaign. To guide and encourage the youth workers in this process, the Alliance provided youth service workers with a tool kit designed to generate additional activities and secondary materials.

Upon completion of this campaign, an evaluative research study ascertained the efficacy of the campaign and informed future work. The evaluation helped the Alliance to better understand the personal responses of their youth workers and the impact of an interactive service approach.

The Team Behind the Pause Button Campaign

Craig Yoe, C.E.O. Yoe! Studios
Early in his career, Mr. Yoe was Senior Designer for toy think tank Marvin Glass & Associates, where he worked on toys including Cabbage Patch Kids and My Little Pony. He was recruited by Jim Henson to be Creative Director and later VP/General Manager of the Muppets, working on everything from TV shows to theme parks. After Henson’s death, Craig declined a lucrative job offer from Disney to make his own magic with Clizia Gussoni and YOE! Studio. Mr. Yoe is an expert in crafting effective messages that young people notice and identify with.

Pat Tobin, Formerly of The Michael Cohen Group
The Michael Cohen Group (MCG) is a research-based consulting firm with a strong specialization in research with youth and children, and a particular focus in researching educational and media products and programs for children. The seasoned team of psychologists, social scientists and child experts at MCG collectively represent decades of experience in supporting clients in all aspects of development, implementation and assessment of educational initiatives. MCG’s commitment, innovation, flexibility and insight have inspired the trust of some of the most well-known and important names in children’s media and education.

Sharing our experiences can have transformative powers. If you are survivor, service provider and/or loved one of someone who has experienced sexual violence, we want to hear from you. Submit your story on our community blog.
Required fields*
We ask for your email so that we may reach out to help you or your loved one. It will not be made public or shared with anyone.
Thanks for signing up!
TRAINING REQUEST
Required fields*
Please provide us with detailed information (date, time, location, and type of training)
Translate